Upon opening your eyes in the morning, do you crave the acidity and kick of a freshly brewed cup of coffee? Or do you prefer the soul-warming heat and more subtle caffeine hit from a cup of tea? Surely, experts agree that one must be better for our health than the other, right?

It turns out that as fierce as the battle between coffee and tea lovers may be, there’s no straight answer that applies across the board.

“It really depends on the person,” said Tamar Samuels, a registered dietitian and co-founder of Culina Health, explaining that one’s preference has just as much to do with a body’s reaction to each drink as it does with one’s taste buds.

Keep in mind that any noticeable health benefits or drawbacks of drinking coffee in particular — but also tea — are directly connected to caffeine, which happens to be the world’s most widely consumed psychoactive drug. And according to Samuels, the effects of caffeine can be experienced within 45 minutes of consumption and can last anywhere between three to 10 hours, depending on the person.

Coffee and tea obviously both contain caffeine, but at different levels.

One 8-ounce cup of black coffee contains about 95 milligrams of caffeine, whereas the same amount of black tea boasts 48 milligrams, Samuels said. A cup of green tea comes with around 29 milligrams. Clearly, in this example, the effects of caffeine will be most readily felt when indulging in a cup of coffee.

Most of the benefits of caffeine truly depend on the drinker’s genetic disposition.

“We metabolize caffeine in the liver, and some people have genetic mutations that make them fast or slow metabolizers of caffeine,” Samuels said.

Caffeine is metabolized by an enzyme in the liver that is encoded for by the CYP1A2 gene. About half of the world’s population possesses a variant of that gene that leads to the slow processing of the stimulant, Samuels said, and it’s difficult to genetically test for it.

“The best way to assess your tolerance is by monitoring your symptoms and working with a nutritionist,” she said. As a rule of thumb, if you feel jittery, have difficulty sleeping and detect a rapid heart rate after consuming caffeine, try to stay away from having too much of it.

Our stress levels can also affect the way we deal with caffeine because both caffeine and stress can elevate cortisol levels, which is bad for the body in the long term.

“People who are chronically stressed don’t do well with caffeine,” Samuels said, listing insomnia, digestive issues, anxiety and high blood pressure as possible side effects. However, it’s important to note that only large amounts of caffeine raise your cortisol levels enough to spark negative side effects, whereas small to moderate amounts of the stimulant can give you a healthy boost.

Speaking of cortisol, the human body already has naturally high levels of the hormone in the morning in the first place.

“The problem with having caffeine in the morning is that your cortisol is already high and the caffeine increases that, so it can produce a lot of anxiety and jitteriness in the morning, which can throw the rest of your day off,” Samuels said. A good way to counteract that is by drinking your caffeinated beverage with food.

Caffeine also naturally contains methylxanthine, which is used by medical professionals to combat airway diseases. Methylxanthine affects the body’s serotonin neurons, which provoke many of the alerting effects associated with caffeine intake, according to Dr. Kimberly Langdon, a member of the medical advisory board at the health services company Medzino. Methylxanthines have been linked to higher levels of vigilance and arousal, which are functions that are intricately connected to serotonin neurons.

Overall, caffeine affects the central nervous system in multiple ways, Langdon said. On one hand, it increases energy throughout the brain, but it also decreases cerebral blood flow, inducing relatively low blood pressure. On the other hand, it activates noradrenaline neurons as well as the local release of dopamine, also leading to alertness.

The benefits of coffee

Some observational research has found that coffee can be beneficial for people with various health conditions, including Type 2 diabetes and heart health, and can boost metabolism, Samuels said. But other studies have shown that some people don’t do well with coffee or that it has no effect at all on health.

Coffee also beats out tea in its amount of polyphenols, which are micronutrients packed with antioxidants that can improve digestion, help prevent neurodegenerative and cardiovascular diseases and even assist with weight management. Although tea also boasts polyphenols, coffee happens to be one of the most — if not the most — polyphenol-rich beverages consumed worldwide.

The benefits of tea

The perks of tea are similar to the ones we associate with coffee, albeit a bit toned down: One cup of tea usually contains less caffeine per serving than a cup of coffee, and the polyphenols are also not predominant. For someone looking for a big caffeine hit, that’s a disadvantage ― but for someone who struggles with the adverse effects of caffeine, tea is probably better. The overall health benefits of tea vary greatly depending on the type you’re consuming ― for example, there are some differences between black, green and white teas.

Here’s where tea earns bonus points: Unlike coffee, it is much easier to find tea that boasts a specific desired function. And there are herbal versions that don’t contain any caffeine at all.

“For example, pregnant women with nausea are advised to try ginger tea to combat the feeling,” Samuels said. “Turmeric-based tea can help with inflammation, and green tea seems to check a lot of boxes in terms of ailments that affect the average American.”

The dietitian added that this allows tea drinkers to target their needs more directly, saying, “There are more variety of benefits from tea because there are more types of tea, whereas coffee and espresso are made with one bean, one plant.”

Langdon also mentioned the elasticity of tea when it comes to desired caffeine levels, arguing that it is simpler to draw out less caffeine from tea overall than it is from coffee. One example: Soak a tea bag in hot water for a few extra minutes to ring out that extra stimulant.

Unfortunately (or, perhaps, fortunately), there is no right answer. As Samuels pointed out, it all depends on the drinker.

“Whether tea is better than coffee or vice versa first thing in the morning really depends on the person who is consuming it,” she said. “That’s true of everything we consume. A lot of my clients are New Yorkers, for example, and they are wired and in front of technology all day. They tend to be too responsive to caffeine, so I suggest they drink tea instead. But a handful of people can have coffee before bed and be able to sleep after.”

That’s all to say, you do you. Whether it is an herbaceous green tea or an aromatic cup of coffee that you crave as soon as you wake up, you know your body best. So listen to it and give it what it needs.

Sun Jan 31 , 2021
Sherri Mixon is used to the fight. A South Dallas native, she has fought for better health care, housing and food in her often neglected part of the city. Now, she is fighting to get her neighbors registered for the COVID-19 vaccine. “I can’t wait,” Mixon said. “People’s lives are […] 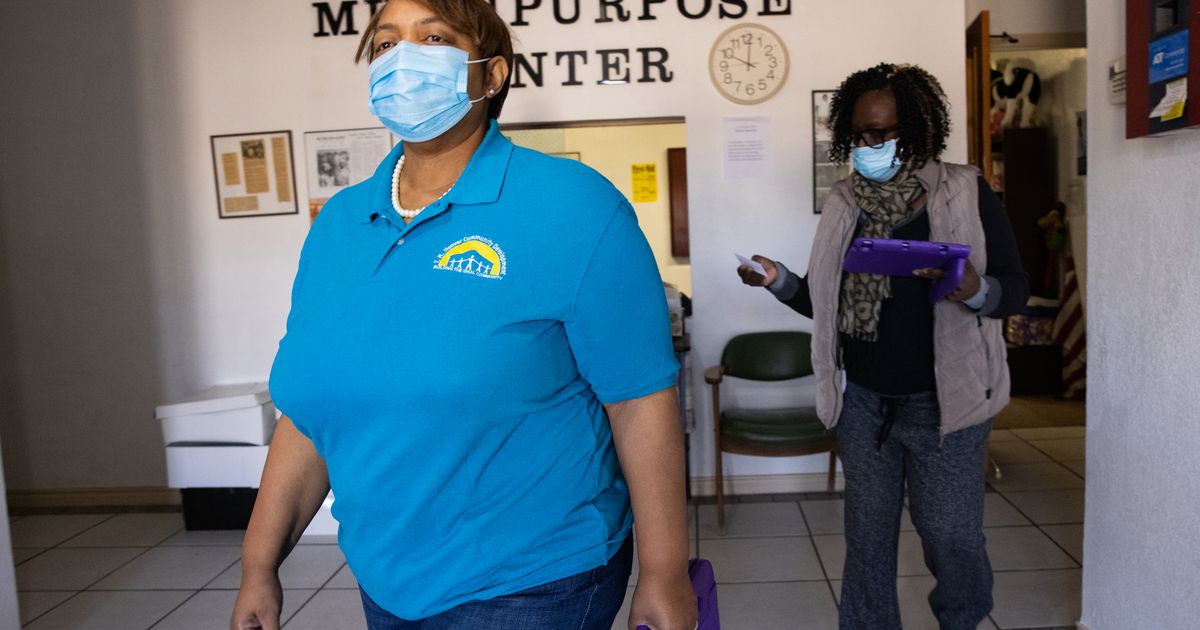