The funding — while just a portion of what was sought by experts — is the largest amount behavioral health has received in a single spending bill in recent memory, and represents growing awareness of the mental toll the pandemic is taking on the country, mental health advocates said.

Still, behavioral health providers said it is likely insufficient and arrives months after the country’s mental health has deteriorated to alarming levels.

“It’s too small given the crisis we’re seeing across the country, but it’s something we can at least build on,” said Paul Gionfriddo, president of the advocacy group Mental Health America. “I think the biggest worry for mental health is how much worse things are going to get in coming months before they become any better.”

Newly released federal statistics confirmed long-standing worries that overdose deaths could rise sharply during the pandemic. More people are now dying of drug overdoses than at any other point in U.S. history, noted the Centers for Disease Control and Prevention in a health alert last week. From June 2019 to May 2020, 81,230 people died of drug overdoses. The largest increase occurred during March, April and May when the pandemic surged in the United States.

At the same time, Census Bureau data this month showed that U.S. mental health problems have reached all-time highs, with almost half of Americans now showing signs of clinical anxiety or depression.

The $4.25 billion for mental health and substance abuse included in the stimulus package is 10 times the amount that behavioral health groups received in the last emergency spending bill.

Since the pandemic began, $175 billion in emergency funding has been allocated to hospitals and other medical facilities, yet less than a fraction of 1 percent of that has gone specifically to mental health and substance abuse services.

In a letter to Congress in early April, mental health organizations estimated that $38.5 billion was needed to save treatment providers and clinics struggling to stay afloat amid the pandemic. An additional $10 billion more was needed to respond to the coronavirus pandemic, they said. But until the stimulus package assembled this week, just roughly $425 million in emergency funding had been designated for behavioral health.

While details of the 5,593-page tax and spending package are still emerging, mental health groups helping members of Congress draft earlier versions said most of the money will likely be distributed through two existing block grants administered by the Substance Abuse and Mental Health Services Administration — one for mental health services and another for substance abuse and prevention services.

Despite the large figure, many advocates worry states will use the money to offset cuts they might make to mental health programs as a result of falling tax revenue from the pandemic.

“It’s like squeezing a balloon, something has to give, and the first to go is often behavioral health,” said Chuck Ingoglia, president of the National Council for Behavioral Health, which represents 3,326 treatment organizations.

In meetings, some mental health groups have also voiced growing concerns about whether President-elect Joe Biden’s administration will be sufficiently focused on mental health. After some noted the absence of any mental health expert on his pandemic task force — which is dominated by doctors and infectious-disease experts — Biden belatedly added on Nov. 28 Seattle nurse Jane Hopkins, who specializes in mental health.

Even before the pandemic, America was facing a deepening opioid crisis. The country’s surging overdose deaths briefly slowed in 2019, giving hope that U.S. leaders’ efforts were having an effect. But the pandemic has reversed any progress.

Last year, for example, San Francisco saw 441 overdose deaths and this year so far has already surpassed 620. Officials in other regions are seeing similar spikes.

“People are losing their jobs and don’t have health insurance and are just looking for some way to cope with life,” said Alex H. Kral, an epidemiologist at the nonprofit research institute RTI International. “In the absence of hope, something like drug use becomes one of the few paths to coping. And it’s become even more dangerous as social distancing has people taking the drugs in isolation, with no one around to revive them if they overdose.”

“We know how long a tail trauma and mental health problems carries with it,” said Gionfriddo. “Just because you throw kids back into school, for example, it doesn’t mean that they’re suddenly okay again. It doesn’t erase everything they have been through and will need help recovering from.

“This money is a start,” he said. “But we are talking about needs that will be ongoing for years.”

Thu Dec 24 , 2020
By Nancy Lapid (Reuters) – The following is a roundup of some of the latest scientific studies on the novel coronavirus and efforts to find treatments and vaccines for COVID-19, the illness caused by the virus. COVID-19 death rates improving in U.S. hospitals The U.S. health care system is getting […] 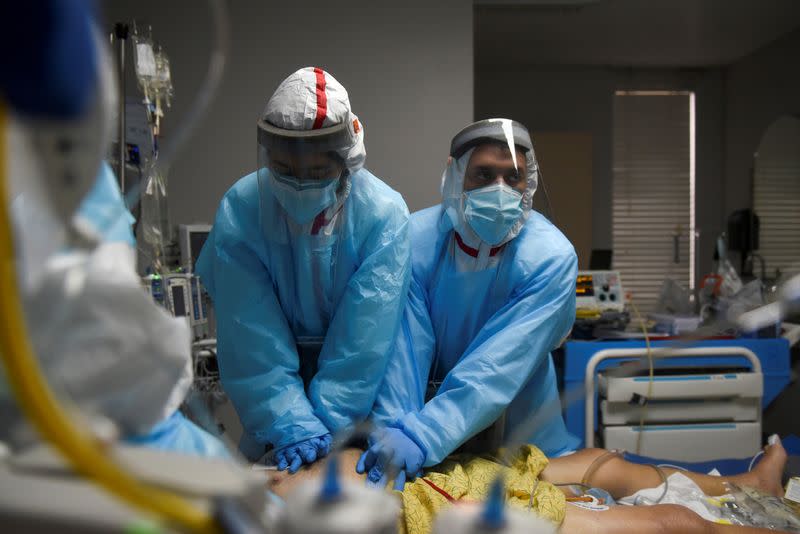