The author. (Photo: Courtesy of Maz Do) More than 40 years ago, my father’s family fled the Vietnam War and came to America. He left behind his younger brother and my grandparents (they would take a separate journey), and settled in a refugee camp in the Midwest. He tells me […]

More than 40 years ago, my father’s family fled the Vietnam War and came to America. He left behind his younger brother and my grandparents (they would take a separate journey), and settled in a refugee camp in the Midwest. He tells me that he would eat fish from the backwater creeks behind the camps ― fish that Americans would never touch, and though he got sick he continued to eat because food was food. Eventually the family moved to California and reunited under one roof. In those days, my father, his brothers and his grandmother slept together on one mattress ― they had fitful dreams, I’m sure.

My father made his way to UCSD, and there, he met my mother who left Indonesia to attend college in America. A decade later they married. In the ’90s, on a winning combination of hard work and improbable good fortune, they rode the Silicon Valley wave to success. They bought a house, they bought a car, they became citizens, and were primed to pass on their victories to another generation. By all accounts, they fulfilled that great prophecy, the American Dream. I have to wonder if my parents, in today’s world, would have decided to come to America at all.

Every hour Americans receive increasingly deranged news about a pandemic which has brought this country to its knees. Yet I see proof from other countries that it is possible to provide everyone proper PPE, monthly additional income for the duration of COVID-19, free and accessible health care, and flatten the curve. It feels like a blunt metaphor that most of America’s wounds from the pandemic are self-inflicted. While we’re seeing record-breaking death counts well into July, abroad, they’re opening up restaurants, bookstores and movie theaters. A dark movie theater, a cold drink, the faint crunch of popcorn … such innocuous pleasures feel a world away.

Here, or so the dominant narrative goes, anyone can have it all. That’s the beautiful thing about this country. Most people would never dream that leaving America could be a good thing.

I consider myself extraordinarily privileged that I can even think of watching movies. I still have a place to live, I’m not in debt, and I have enough to pay for essentials. I have benefitted and continue to benefit in a million spoken and unspoken ways from my privilege. I am an American citizen, cisgender, a “model minority,” I and graduated from an expensive private university without student loans. I’m 23, healthy and live in New York which grants me access to incredible opportunities (if rent extortion). Yet with all my advantages, even before the pandemic, I found that I faced existential questions due to the poor policy priorities of this and past administrations.

I’m privileged enough that I’m able to consider moving to another country as a viable option, and I’m able to write this very essay. My parents came from countries that don’t afford the same civic and human rights, social norms, job opportunities, or amenities we consider day-to-day essentials.

When I tell my father that I’m thinking of moving to a different country, I’m met with shock and confusion. What was all that struggle for—all the years he was separated from his parents, the financial instability, the racism at school, and later, at work—if not to bring me up in the land of opportunity? I don’t know what it’s like to go hungry for days, or to not be able to (constantly) speak my mind. Here, or so the dominant narrative goes, anyone can have it all. That’s the beautiful thing about this country. Most people would never dream that leaving America could be a good thing.

My mother, always four steps ahead, thinks it’s not such a bad idea. When I tell her I’d like to move to Montreal, she texts me: “Yeah with global warming, Canada is not such a bad place??”

The repetition of increasingly insurmountable and uniquely American failures makes me wonder the forbidden thing: if this country is beyond saving.

My parents have lived their whole lives as survivalists. Perhaps in one sense, they’ve passed that trait along to me; I’m always waiting for the other shoe to drop. But it’s entirely possible that with all my privilege I’m blind to all that I have.

Part of me wonders why I shouldn’t just stay here and keep fighting to make this country a better place. I could attend more protests. I could volunteer at asylum clinics. I could continue to vote, I could donate more to mutual-aid organizations, bail funds. I’ve done these things already, although not nearly enough.

On the one hand, donating and helping in whatever small ways I can makes me feel better, more hopeful. On the other hand, the repetition of increasingly insurmountable and uniquely American failures makes me wonder the forbidden thing: if this country is beyond saving.

Yes, other countries have similar legacies of racism, colonialism, inequality and violence. But it’s telling that the world is shocked by the way our police murder innocent Black people in cold blood. Our elected leaders are blatant in their preference to protect men’s right to guns over children’s lives. It’s absolutely insane that America, the richest country in the history of the world, has 4% of the world’s population, yet 25% of COVID-19 cases.

Moreover, that infamous hustle, that “American spirit,” has translated into a grotesque capitalization on suffering. Right now, Wall Street vultures consider the uptick in evictions a “bonanza,” a “once-in-a-lifetime real estate opportunity.” Once in whose lifetime?

I don’t want to be here anymore. I realize I say this as a very lucky person. Yet with all my luck and privilege I don’t currently have health care.

I don’t want to be here anymore. I realize I say this as a very lucky person. Yet with all my luck and privilege I don’t currently have health care. My parents’ expectations are that as a grown adult I should be able to provide for myself, but with cheapest options available at $500 per month it feels like there’s no choice at all. I’m afraid that if I break an ankle or catch COVID-19 and discover underlying complications, I’ll have to drain my savings to save myself. I rent an apartment but I have no fantasies of owning property.

I’ve invested in a 401k, but I have doubts it will be there or be enough by the time I need to use it. If I lose the gig that’s keeping me afloat, I’ll have to rely on unemployment. For now, that looks like an extra $600 per week on top of existing benefits, which is more than someone would make at a job that pays $15 per hour. I should note that as of today, that extra $600 is slated to end in two weeks, and Congress still has not made up its mind whether they’ll continue the program.

I’m constantly subject to the arbitrary whims of a government which prioritizes Twitter tantrums over human lives. Being lucky in America means that there’s no safety net between me and the ground, even while sex-traffickers, warmongers, pillagers, and rapists are shielded from impunity. Make it make sense.

My family never fails to remind me that they came to America to make a better life for me. My story is not mine alone ― it’s the cornerstone of millions of first-generation Americans’ stories. My generation, however, is perhaps the first to see America in decline, crumbling right before our very eyes. More than a third of young adults in America believe there are better countries than the U.S. I’m one of them.

Love HuffPost? Become a founding member of HuffPost Plus today.

My family never fails to remind me that they came to America to make a better life for me. My story is not mine alone ― it’s the cornerstone of millions of first-generation Americans’ stories.

Yes, you can still find spectacular success in America, but living here is a gamble for which the price of losing is one’s life. For all of Trump’s efforts in trying to keep people out ― and let’s be honest, Trump is a symptom of the rot, not the rot itself ― there is little thought put into keeping people in. The deep irony of all of this is that most international borders are now closed to Americans.

When they open back up, I think I’ll have my eyes set on somewhere else. I want to go somewhere where health care is considered a right, not a privilege, and where a gun isn’t considered more valuable than a human life. Somewhere where my freedom isn’t predicated on how much money I can funnel into the economy. Where true justice doesn’t feel improbable, even impossible.

Have a compelling first-person story or experience you want to share? Send your story description to [email protected]

This article originally appeared on HuffPost and has been updated.

5 health benefits of running and how you can get started

Tue Jul 28 , 2020
Running can improve your physical and mental health — and it has short-term and long-term benefits. microgen/iStock Running is one of the best forms of exercise for your overall health. From better sleep to a stronger heart and improved mental health, the health benefits are extensive.  And you don’t need […] 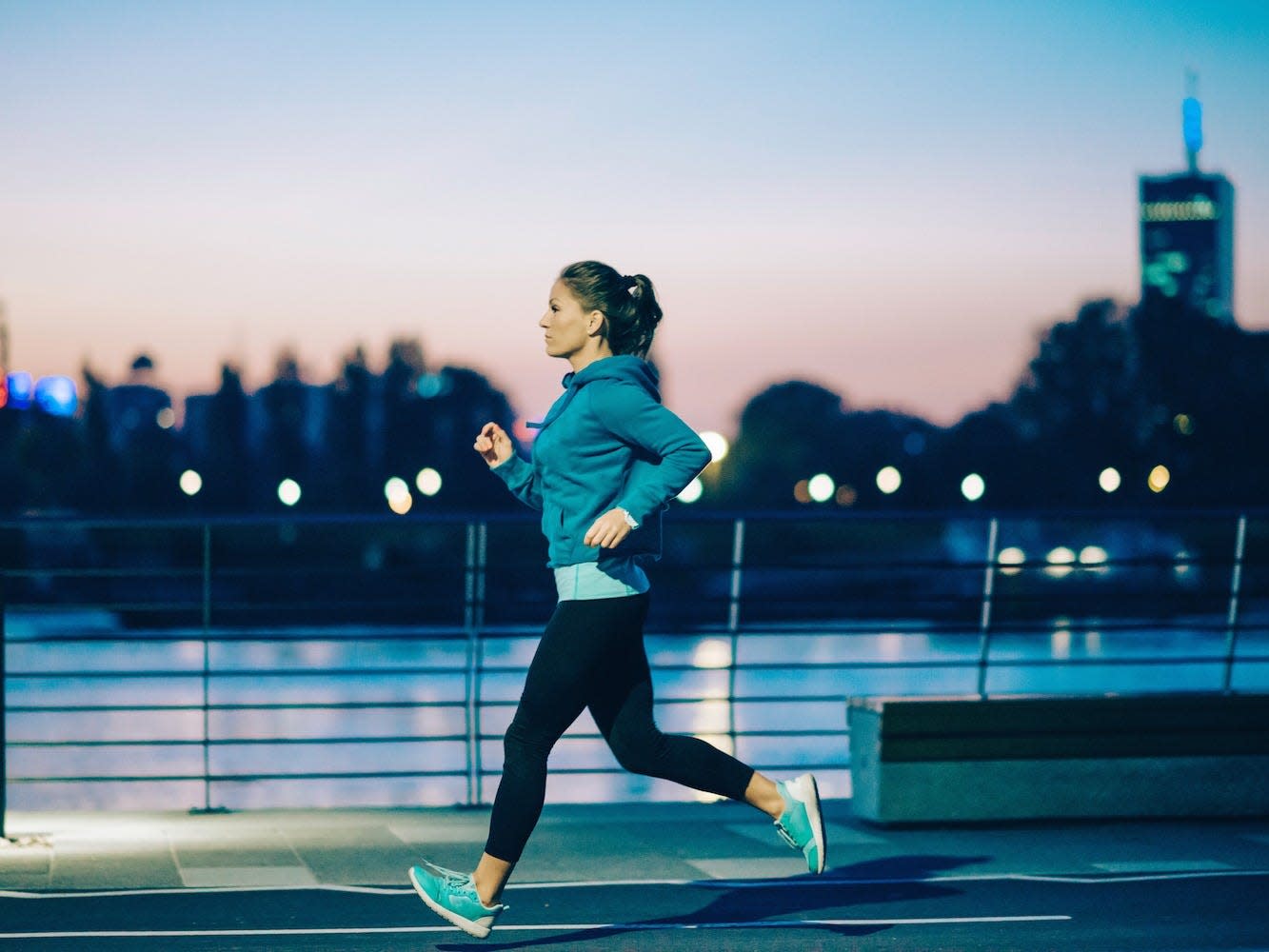